*Note to self* 'Must make more time for blogging! Tut tut to me for I have neglected my poor 'Colitis and ME' blog these past few weeks. Truth be told I usually enjoy blogging most when it is late at night, when most other distractions have gone to bed (you know who you are!) and I am free to unwind and put my thoughts of the day/week down on a piece of paper. Trouble being is that this month I have so much going on at once that I have many blog posts all half written as my mind keeps wandering from one topic to the next. I'm finding it tricky to clear my mind and just put my thoughts down in a clear cut way which usually comes so easily to me. *Another note to self* Chill tha feck out! HA! My apologies not my normal tone. Some bloggers have some sort of schedule while others like to plan their blog articles - me? I just write whatever is on my mind...which is rather a lot and its all one big mountain of confusion hence why I am struggling to blog. So...what is on my mind?

What's on my mind is a blog post that I have been wanting to write for a long while - trouble being I've simply not had a free minute to myself to actually get it all down on paper. So here goes.

A topic I stumble across time and time again is 'what/how do you explain to someone what Crohn's Disease or Ulcerative Colitis is, how much do you tell them and how on earth do you own up to having it yourself'. I know you are hoping that I have the magical answer but truth be told ...there is no one single correct answer. The truth is that IBD is a complex illness which makes explaining it to others rather tricky. So let's give it a little go.

I am sure we have all been there, the dreaded moment when someone asks 'whats that?' which prompts you to launch straight into a bit of a flap, panic or a pickle and makes you think 'oh crikey how do I explain this one'. Then comes the explanation which you send thinking 'jee whiz I sure hope they take this well' and what you get back is.... 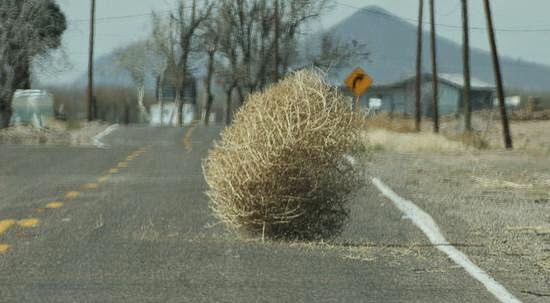 *To benefit those who don't understand the significance of the above photo or simply are lacking a sense of humour - the above image is of 'tumbleweed' which is used in Wild West movies to show that nothing is going on but a looooong silence.*

NOTHING!! You get back NOTHING but a really awkward silence.

Which is followed by a 'please say something...anything'.
To which point you are thinking 'oh crap why did I say that' 'time to look for new friends' or 'maybe they are confused'.
When the reality is that 4 hours later the person will reply with a 'oh sorry forgot to text back' 'my phone went flat' or 'sorry I've been hiding under a rock all day with no phone reception' huh likely story! I know what you are all up to - you are all 'Googling' the symptoms HA! Do so at your own peril.

Anyhow - from my point of view you first need to decide who it is you are trying to tell as to determain how much detail you go into. Let's face it - the in-depth chat you have with your best mate is not going to be the same one you have with the traffic warden. So on and so forth, which makes having one set answer impossible.

Let's look at it as a colour coded system which may make it easier for you to determain who falls into which and what it is we should say. (the following is simply a guide and in no way the set rule)

Okay so who would I say fall into 'the red people' category hmm lets see. Let's keep the RED people for curious passing strangers who happen to bring up your illness in conversation. Someone who overhears you talking and has a question or maybe someone who is talking nonsense and you wish to strangle them (HA again - I am totally kidding no violence please) the people you wish to politely correct. Jeez I even ended up talking to the bloke at the other end of a customer services phone-line the other day so trust me when I say you should have your set answer for THE RED PEOPLE to hand.
Hmm what would I say to the red people??

I would probably just leave it at that - I mean there is no point reeling off the tons of symptoms to the guy you just met in the street. Chances are he will be perplexed (confused) by the above amount of information alone.

The type of people who would fall into this category would be workmates/ colleges, curious class mates, good friends, people you have things in common with or have spoken to at least once before and so have some kind of rapore with. Chances are you will stumble across one or two nosey people or people who will prompt the 'what does that mean' question. To which you need to come up with a bit more of an answer/explanation.

Again the above answer that you gave the red people still applys but you would then add on to it. So you would say something along the lines of:

'I have Ulcerative Colitis which is similar in some ways to Crohn's Disease, both of which are types of Inflammatory Bowel Disease. In the average person there is 'good bacteria' fighting off the 'bad bacteria'. When it comes to those with Crohn's Disease or Ulcerative Colitis it is thought that the 'good bacteria' is working overtime and trying to fight off an infection (the bad bacteria) which does not even exist. So instead of attacking the 'bad bacteria' it attacks the lining/wall of the intestines instead. This leads to inflammation, ulcers, cramps, fatigue and pain. As of yet there is no cure for this lifelong illness'

Again those who are simply being polite in wanting to know what the illness is probably are not prepared to hear the full run-down or checklist of symptoms. So I would leave it at that.

Crikey - if you are lucky enough to fall into the green people category you are either a best mate, a close family member, a doctor or someone who has asked too many questions so I feel you are somewhat interested in my illness and therefore I am going to roll out my red carpet speech to you so that you may get a true understanding of my daily battle. Be warned - you use this shpeel at your own risk! There are those who like to know more but when told 'more' then decide they are better off knowing only what they knew before. Well tough luck - if you have prompted an in-depth rant about my daily whooo's and haaa's then you are going to have to listen to the whole blooming lot!

My red carpet speech for those who ask too many questions:

Both Crohn's Disease and Ulcerative Colitis are known as Inflammatory Bowel Diseases (IBD) which cause inflammation and ulcers along the digestive track.

Ulcerative Colitis and Crohn’s Disease are thought to be due to an imbalance of bacteria in the gut/colon. In the average person there is ‘good bacteria’ fighting off the ‘bad bacteria’. When it comes to those with the illness it means the good bacteria is working over time and trying to fight off an infection (the bad bacteria) which does not even exist. So instead of attacking the bad bacteria, it attacks the lining/wall of the intestines instead. This leads to inflammation and ulcers, cramps, fatigue and pain.

Main symptoms just to get you up to speed are vomiting, Anemia, loss of appetite, weight-loss, more trips to the loo, swollen joints and many more. Not to mention all of the secondary symptoms from medications and problems caused by taking these long term. Alongside these there are things like anxiety, hair loss, depression etc, the list is endless! This results in extensive trial and error to find a medication to soothe the symptoms. Some unfortunate souls end up having to have serious invasive surgery to avoid blockages, ruptures and all sorts of complications.

The reality of these illnesses not having a cure mean that 75% of those diagnosed with Crohn's Disease and 25% of those diagnosed with Ulcerative Colitis will end up having major invasive surgery (sometimes life saving surgery) to have parts of their intestines removed or their whole colon in a bid to ease the inescapable torturous symptoms. There are far too many now living without parts of their intestines or whole colons. People can and already have died from these cruel diseases.
I completely sympathies that telling people about your illness is tricky and at times AWKWARD!! I too have been through the stage of telling my nearest and dearest. I began by letting them in on the general idea of IBD then felt the longer I was diagnosed the more of an explanation they deserved from me as to my now peculiar behaviour. In fact I documented it as one of my first blog posts back in 2013. I was super nervous about telling them all but was rather surprised by their response. If you feel you would benefit from seeing my experience then CLICK HERE to read how things went when I told my friends.

As I said, my friends all took the news really well. I think that is partly down to understanding who can handle what amount of information and who will be mature enough to hear the different aspect of a chronic illness, one as catastrophic/detrimental to a persons life as Crohn's Disease or Ulcerative Colitis.

I am wishing you all super good luck with your discussions, remember that on occasions some may make the odd rude or unkind remark. Chances are these will be due to lack of them understanding your illness not because they wish to outright insult you. Therefore you should be ready to hear 'have you tried this diet' or 'you don't look sick' these are just set responses that you will hear as people don't really know how they are meant to react to such news. Try not to lunge for the persons throat ha ha however tempting that may be! For each person you educate you will spare another IBD'er going through the same thing. Together we will make the world a better place and easier for the next generation to not feel they need to keep IBD to themselves. You have noting to be embarrassed or feel ashamed about. If anyone does give you a hard time - send them to me :P I will take care of them mwahahaha!

Be sure to come back and let me know how it all works out for you! Xx
Posted by Unknown