I have a disability; there, I said it!

I think it's fair to say that people with invisible illnesses spend a great deal of time trying to convince the medical professions that they are genuinely sick and are in desperate need of the extra support that we find ourselves asking for; after all we know our bodies the best so know when something isn't right. Believe me when I say that individuals with chronic illness will only ask for extra help and support when we genuinely need it. Think about it....if you spent so much of your existence in the hospital/ attending appointments, would you then go and spend even more time in the waiting rooms? I think not; so why do we struggle to get people to believe us when we are genuinely sick. "You don't look sick to me" jeez thanks a bunch, in which case just discredit my burning internal pain seen as I've gone out of my way to brush my hair so that I do not offend anyone as I stroll on by. Maybe the lack of compassion from the medical profession is down to being rushed off their feet or having encountered troublemakers in the past and therefore are cautious about making the same mistake twice. 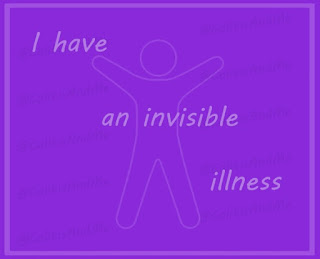 Why do we even need to convince people in the first place you may be asking. Believe it or not... try as we might, we're not indestructible. For the most part individuals with chronic illness simply plough on through life making the most of things. So when someone is reaching out asking for extra help the least you could do is be a little supportive. It seems so silly that we have to make it so glaringly obvious that from time to time we/ I will need extra support, whether that be emotionally, mentally or physically. There will be times when I turn to friends or family for extra comfort, these are the times that I am struggling the most so please don't make me feel even worse by having to explain in great detail why I need your support.

I have attempted many times to open up to close friends about my illness and at times I thought that we were making great progress. I understand that there is no manual for being friends with someone who has a chronic illness and I understand that at times it must be tough but just when I feel like we are on solid ground silly remarks pull the rug from under my feet and it feels like we are straight back to the start.

'My journey is not the same as their journey' I find myself explaining one evening. I can't express how frustrating it is when people compare individuals with chronic illness or how judgemental people can be to those with invisible illnesses. "My friends cousin has that illness and he gets on with things just fine" "Someone at work has the same illness and they work full time" okay great, point duly noted.... what about "My friend has that and is in the hospital fighting for their life". Yes exactly.... comparing chronic illness is a silly thing to do; it benefits no one. I believe that these things aren't said out of malice and friends/family feel like they're trying to encourage us, when in reality they're just making me feel worthless. Don't you think that I am doing the utmost to tackle my own journey with an invisible illness? Do you feel that I'm simply not trying hard enough?

"Yeah but like you don't have a disability do you?"
'You're disabled under the Equality Act 2010 if you have a physical or mental impairment that has a 'substantial' and 'long-term' negative effect on your ability to do normal daily activities'- Extract from https://www.gov.uk/definition-of-disability-under-equality-act-2010
Both Crohn's disease and Ulcerative Colitis do fall into the remits of having a disability. Surprising as it may seem a person can be seen as having a disability despite having all of their working limbs in place and none of their senses missing (common sense is omitted from this example). "I don't want to be seen as having a disability; I don't want to be treated any differently to others". Great news, there are procedures in place which hopefully prevent a person with a chronic illness being treated unfairly or being at a disadvantage to others. Personally I have no issues with declaring myself as having a disability if it means that I am given the same level playing field as others. I am no less able than the next person... providing that provisions are put into place for me. 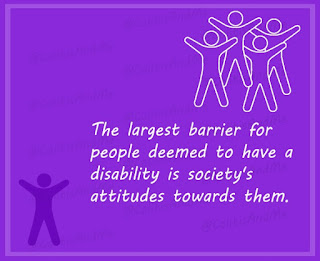 Despite my gutsy attitude to tackle whatever comes my way, I too have to be realistic in accepting that there will be days when I simply cannot get out of bed, or days that I will have to give up as I need to spend time in the hospital... on these occasions I am thankful that I can class myself as having a disability for it enables me to extra support when I need it the most. I am not invincible, nor is my chronic illness steering the ship; it is an equal partnership where each party has a mutual respect and understanding for one another. I do not feel the need to run umpteen marathons or tackle the highest mountains to prove my fighting spirit to the world. 'Courage doesn't always roar. Sometimes it's the little voice that whispers... I'll try again tomorrow.'