If not me, then who?

I'd like to get back to basics. Yes these days I find myself a blogger, fundraiser and campaigner...but only a few months ago (like 10) I was where many of you are now. Knowing very little about Crohn's Disease or Ulcerative Colitis. I was the one looking to bloggers, vloggers (video bloggers) & articles for guidance in this turbulent journey with Inflammatory Bowel Disease because lets face it the doctors are pretty useless at explaining things.

What did I know of my illness 10 months ago? Not very much at all by the looks of things!
I knew not of what IBD meant - I'd never heard of the term.
I had very little understanding of Crohn's Disease & how it effects the system.
I had little knowledge of Ulcerative Colitis although I had the illness for over 4 years! I knew only of what my doctors and consultants had told me...which was not very much.
I knew not of when World IBD Day was nor did I know what the purple ribbon represented.
I had no idea of which items were on the dietary 'no' list.
Nor did I have any knowledge of stomas/ostomys. When I first saw them I could barely look at them...for the simple fact I didn't understand them. I now find myself really comfortable asking questions about them.

I was on the other side, looking up to the great IBD bloggers/advocates who were doing their utmost to raise awareness of these life long, life changing illnesses. Which brings me to ask the question, are doctors and IBD charities doing enough to support those diagnosed with Crohn's Disease or Ulcerative Colitis?? Are these people who are able to make such a vast difference really filtering the right kind of information down to those who need it most? I know I went for a long time only knowing half the story.

I find my advocacy not only revolves around championing awareness of Inflammatory Bowel Disease but I spend a vast amount of time pointing people in the right direction. I honestly do not mind guiding a patient to a charity's website or attempting to answer someones questions on the topic of IBD although I get frustrated as to 'why me?'. Why is it that so many are falling through the net and being left to a world of loneliness and isolation. Why it is down to me to help these people find their national charities. Why is it down to me to share the small knowledge I have with others; surly the basics should be covered by doctors/ charities. Why is it that so many are walking around battling daily with an illness they don't even understand themselves. How are we supposed to educate the world on Crohn's Disease and Ulcerative Colitis when those who have the illness are unaware of even the basics? 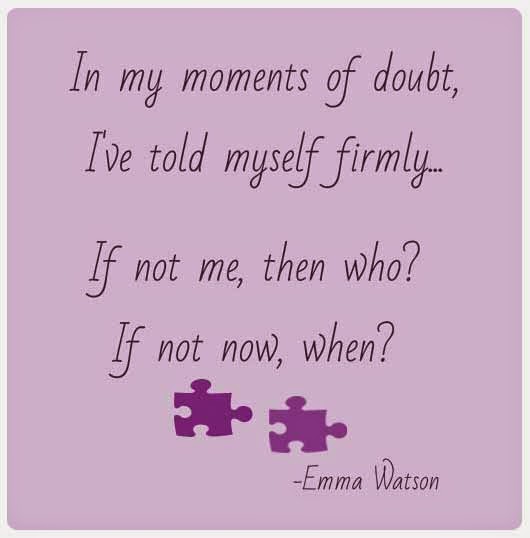 Quote by Emma Watson from the #HeForShe movement.

It is safe to say that there is a vast crevice between those in the medical/scientific professions who work with IBD each and every day...and those who are struggling the most to live with the illness. Surly the whole system would work better if the world was better at communicating?! Communication is a two way street to which teamwork in needed. I believe that times are changing in the sense that those battling Crohn's Disease or Ulcerative Colitis are becoming more open and honest about their troubles. Lets hope we can continue building on this and encourage the medical/scientific professions to learn to communicate better with us. I truly believe we have a lot to learn from one another for after all....we are on the same team right??

I am lucky that I found the online IBD community. I am lucky that I am now aware of what support is out there for me. I have been privileged to have spoken with and heard so many of your stories; each story unique in their own right... but I'm disappointed to learn the lack of support that is out there for us all. In the past 10 months my life has changed in so many ways! I began my blog as a way to document my journey with this life-long illness though I now find I'm spending a lot of my time supporting and encouraging you all to speak openly and honestly about your illness, not to worry I too was never this confident/comfortable with my illness 10 months ago. Never would I have dreamed I would be playing such a supportive role and would become a vital link between the medical/scientific profession, IBD charities and those living with IBD on a daily basis!

So again I ask the question;
Are doctors and IBD charities doing enough to support those diagnosed with Crohn's Disease or Ulcerative Colitis?? Are these people who are able to make such a vast difference really filtering the right kind of information down to those who need it most?
Let me know your thoughts in the comments box below Xx
Posted by Unknown