I was REALLY hoping to avoid blogging this week and hoped other bloggers would take up the story but as the majority of people tend to fend for themselves and as my mother usually says "If you want a job done ....do it your blooming self!!" So...

Let me introduce you to the new IBD awareness campaign .... 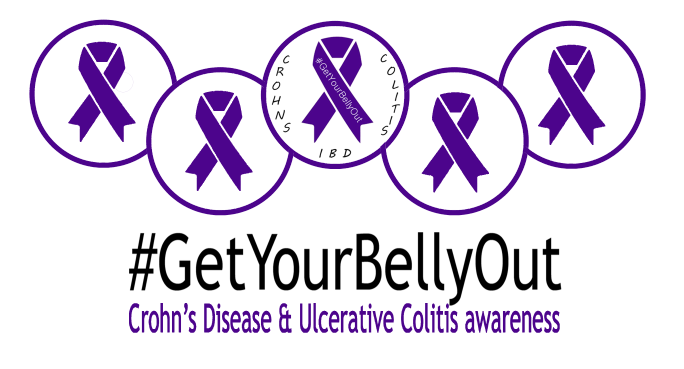 After 3 days of continuous hard work I am tired, agitated, annoyed, warn out, a bad head and a puffy swollen hand. I'll be honest and say that I have neglected myself a little and put my body on the line but HOPEFULLY you would have heard people talking about the #GetYourBellyOut awareness campaign.

For those who are unfamiliar with Crohn's Disease or Ulcerative Colitis here is a little snapshot of what these life changing illnesses are:


Ulcerative Colitis and Crohn’s Disease are thought to be due to an imbalance of bacteria in the gut/colon. In the average person there is ‘good bacteria’ fighting off the ‘bad bacteria’. When it comes to those with the illness it means our good bacteria is working over time and trying to fight off an infection (the bad bacteria) which does not even exist. So instead of attacking the bad bacteria, it attacks the wall of our intestines/colon instead. This leads to inflammation and ulcers, cramps and pain.

Main symptoms just to get you up to speed are vomiting, fatigue, more trips to the loo, loss of appetite, weight-loss, swollen joints and many more. Not to mention all of the secondary symptoms from medications and problems caused by taking these long term. Alongside these there are things like anxiety, Iron deficiency, depression etc, the list is endless! This results in extensive trial and error to find a medication to soothe the symptoms. Some unfortunate souls end up having to have serious invasive surgery to avoid blockages, ruptures and all sorts of complications. There are far too many now living without parts of their colons/intestines.
3 days ago I noticed a tweet over on Twitter by a lady called Sahara, this was her photo ... 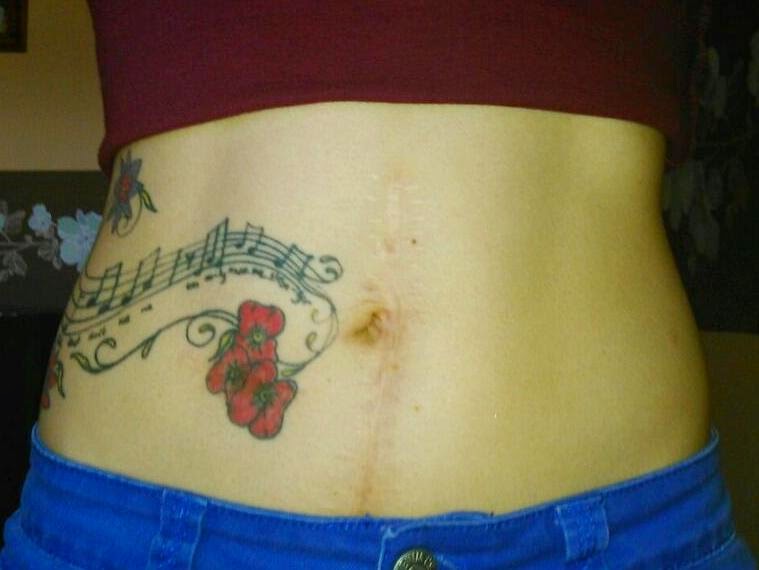 She had posted the photo for IBD Awareness. So I seized the moment, took a BIG deep breath in...and added my belly photo into the mix. At the time of posting my photo I wasn't really aware of what I was getting myself into Aha, as my usual blogging style goes...make it up as you go along!! 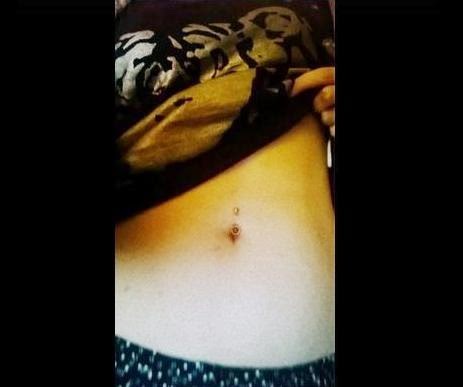 NO, taking a photo of my belly was NEVER the plan when I started my blog nor was it my idea of fun to then go and post it onto the internet (yes, I did hover over the send button)...now some how it has been plastered all over social media and the inter web forever and a day (oh golly, I really didn't think this through did i? aha)  I stand firm in my reasoning for doing so, to help raise awareness of Crohn's Disease and Ulcerative Colitis.

Recently a craze swept the world pretty much by accident called '#NoMakeUpSelfie' in the aid of raising funds for the charity Cancer Research UK. This consisted of people posting photos of their beautiful and natural faces for the world to see, then nominating friends to do the same and donate £3 a time to the cancer charity. No I do not understand what a face make-up free has to do with the campaign but for some reason unbeknownst to me it did. Horah! That resulted in the charity raising millions of pounds for research...which can only be a good thing right??

With the above campaign in mind I had a cheeky word with Sahara (the lady who posted the above photo) and suggested we add a unique hashtag so that everyone, no matter if they had IBD or not could hopefully join in with our awareness campaign. From out of no where I plucked '#GetYourBellyOut' which was connected to the charity page Sahara and a lady Gem had already set up. Finally another lady named Lorna joined us and the campaign leaped into gear. We decided the rules would be to either post a photo of your belly and include the hashtag (so that they all ended up in the same place) then nominate friends to do the same or alternatively people too shy to get their bellys out would donate a small amount (£3) either by texting the charity number 70070 or by CLICKING HERE to donate via the JustGiving page.

Never would we have imagined what was in store for us...

That was now 3 days ago, since then I have been tirelessly tweeting, posting, sharing, talking, eating, sleeping and breathing the IBD awareness campaign.

I am THRILLED to tell you that the campaign has gone from strength to strength. Through the past 3 days people have increasingly been joining in, donating and most importantly discussing with friends and family and raising the vital awareness that is needed for these unknown and hidden illnesses.

Unlike the NoMakeUpSelfie trend, the #GetYourBellyOut awareness campaign for Crohn's Disease and Ulcerative Colitis is ACTUALLY connected to the photos people have been posting. Fighters of IBD have shared their most personal journeys, battles and stories with the whole world. It was time the whole world took notice of how serious and at times just how invisible these illnesses can be. Who can deny that from seeing the vast array of photos which now circulate the internet.

The support from friends, family, work colleagues, school friends and strangers has been phenomenal!!! Never have I seen so many 'Likes' 'Favourites' and supportive/encouraging comments flood in. This campaign has already done wonders for building everyone's body confidence and rebuilding peoples self-esteem. I still can't get over how amazing, brave, strong and inspirational all who have taken part have been. Hopefully this is just the start and we have a long way to go!!

The campaign has already raised £830 in the last 3 days alone. My hope is that this will continue to rise as more IBD sufferers coax their friends and family to join in the campaign. This has been the biggest opportunity to make a real difference is raising the awareness of IBD, each individual who posts their photo is making a difference, a change in bringing us all one step closer to having Crohn's Disease and Ulcerative Colitis become household names!!

Later all photos posted will be compiled into one awesome campaign video but for now I will leave you with a TINY tiny amount of the photos that have been posted so far.... 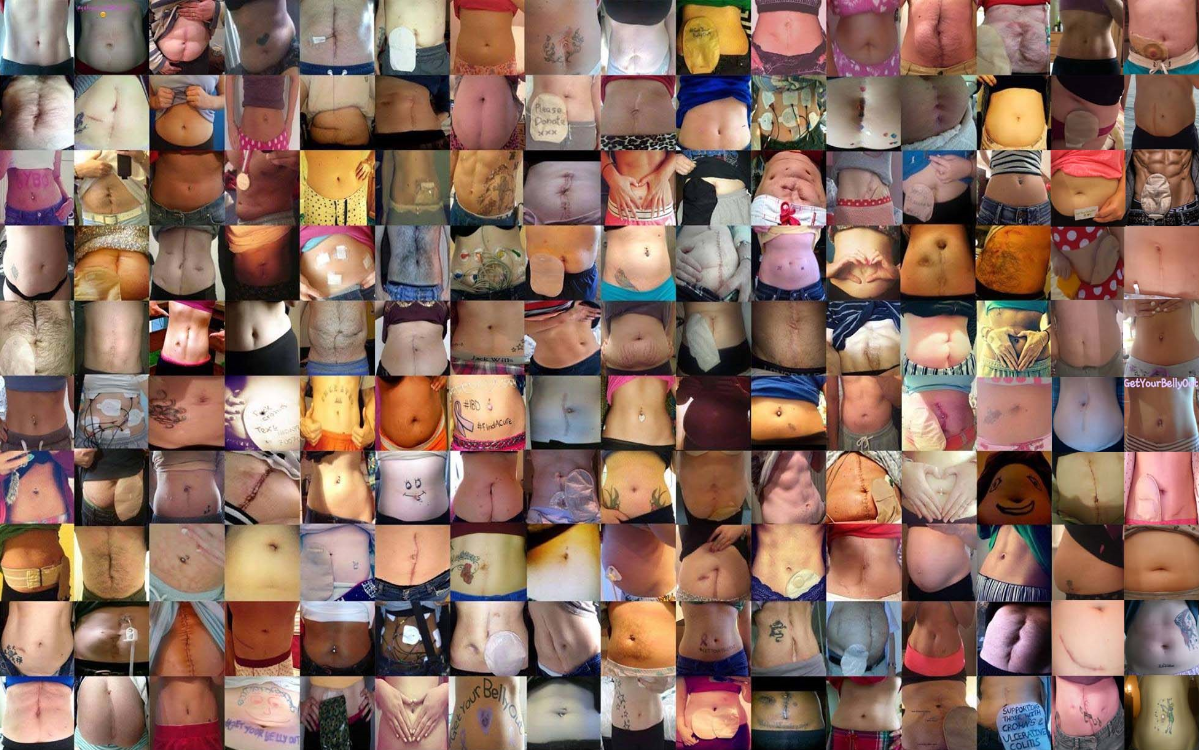 Until then do let me know what you think about the campaign. Xx

**Update** I'm thrilled to tell you all that the #GetYourBellyOut IBD awareness campaign has now raised over £17,000!!

Please watch the campaign video by the wonderful Thaila Sky>